I wrote the article below just after I had submitted the softbound copy of my thesis for examination back in 2017. It is more of a summary and overview of the tools that I used, and the approach I took with the writing. It may have some useful links to tools for other writers, but the approach is just what worked for me in the end. I highly recommend the book “The Clockwork Muse: A Practical Guide to Writing Theses, Dissertations and Books”, 1999 by Eviatab Zerubavel. I could have done with following it closer in terms of time management, but the approach of writing the whole thesis as one piece of work ensured that the narrative and writing style flowed consistently throughout. 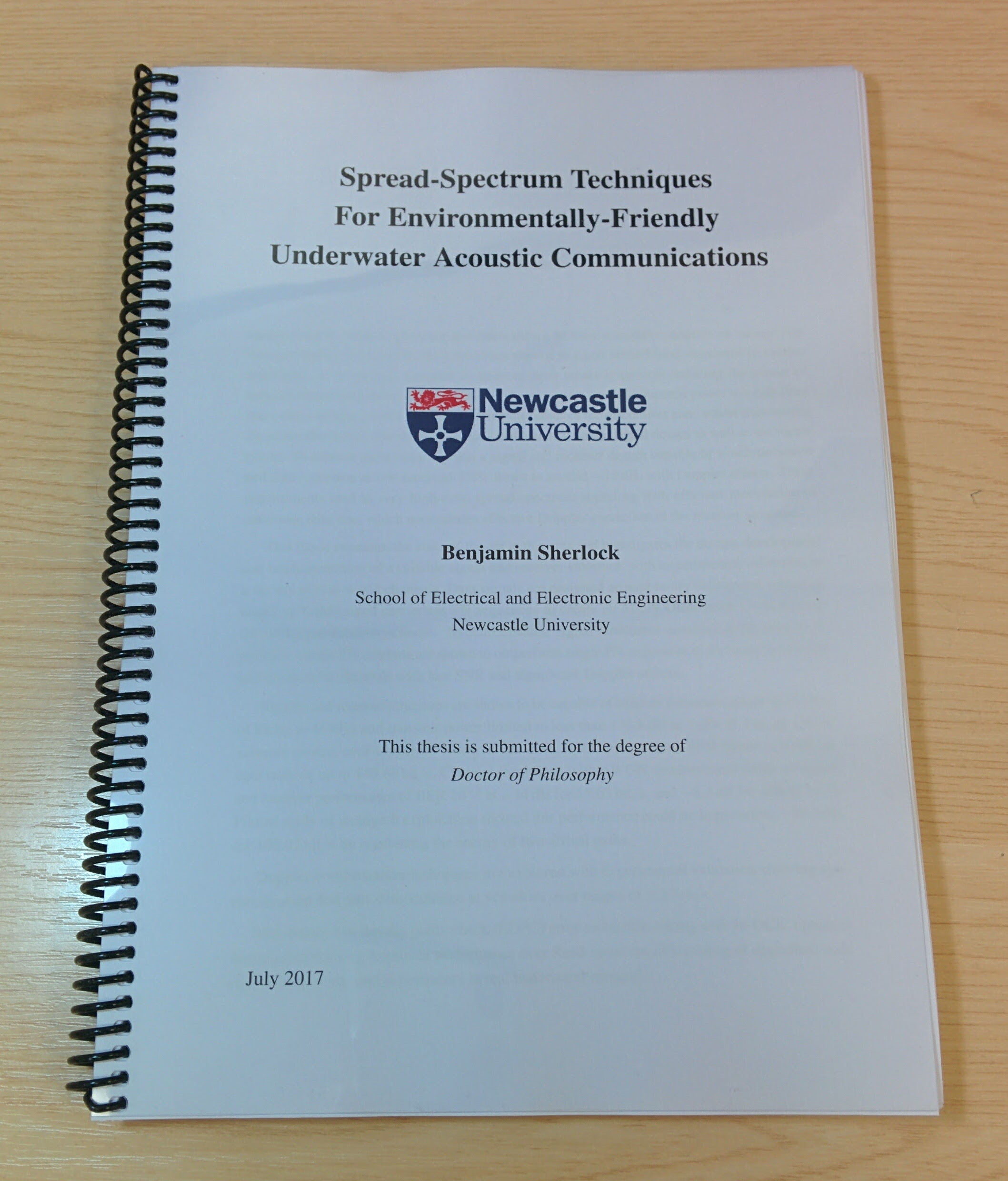 At this moment (July 2017), the thesis has been submitted and is awaiting examination (and all the process that this entails). I have summarised very, very, briefly the tools, and general approach taken to writing this thesis, whilst it is still raw in my memory. Feeling the finished professionally printed and soft-bound copy in my hands was quite a moment after so much hard work and emotional labour. I have had a short time (1 week) to rest and recharge since the submission, and felt the time was right to get this on paper (screen).

The thesis was written using the LaTeX markup language to ensure that it could be saved as plain text in a version control system, it was future-proofed by not being tied to any particular editor or operating system, and it compiled to correctly produce precisely what was required in the final document.

The version control system used was Git (git-scm.com), with a bare repos on a unix server used as the central store/origin.

The editor and compiler used in the end was the cloud-based Overleaf (https://www.overleaf.com/register). This allowed Git to pull and push both from Overleaf and also to the unix-based origin repository. Not requiring a complex build environment to be replicated across multiple machines meant that the thesis could be worked on with ease from anywhere so long as I had a browser and internet connection. Reducing friction meant that work happened when otherwise faff may have been sufficient excuse not to write.

Images were produced using yed (www.yworks.com/products/yed) for block and flow diagrams, which were exported to SVG format. Fonts were set to use Times New Roman to ensure consistency across platforms.

Vector images were created using Inkscape (inkscape.org), and the SVGs from yed were also imported into Inkscape before the final output PDFs were created for upload to Overleaf.

Graphs were produced using Python scripts and Matplotlib (matplotlib.org) with a customised colour and marker scheme to produce professional, clear and consistent graphs across the entire thesis. Data was produced using bespoke C++ analysis tools or MATLAB and saved as CSV files for future-proofing. The scripts then processed these files accordingly to produce the graphs.

References were incorporated into a bibtex text file. The key names used were [author][year][first non-fillword of title]. The pdfs were stored alongside in the folder structure and filenames formatted as below:

Google scholar was mainly used to search for and download the bibtex citation data.

The LaTeX structure used for the thesis originated from the template created by Krishna Kumar (github.com/kks32/phd-thesis-template), designed to meet the requirements of Cambridge University Engineering Department. Modifications were added and the structure tweaked slightly to meet the specific formatting requirements of the author’s university.

The structure or skeleton of the thesis followed much the same as all other engineering discipline theses. The decisions were mainly regarding the breakdown and ordering of the technical chapters to ensure a sensible division of themes whilst maintaining a consistent narrative throughout the entire thesis.

With the template tweaked, the skeleton of the thesis now in place and consistent figures now possible to be produced the writing process began for real. The methods and results were the first items to be added to the technical chapters. Starting with the first technical chapter and working through them, the first pass included the methods text and block diagrams, results figures and tables.

Once the discussions were complete the introduction and summary of every technical chapter could be produced. Again in the same was as the discussions, handwriting to A4 lined paper before typing up later in the day.

The conclusions chapter was largely a case of drawing these chapter summaries together along with an overarching discussion of the thesis as a whole.

The thesis in entirety was then printed and proof-read through much as before, without distraction of computers and the internet.

For each of the sections of work, there were a number of iterations in printing, reading, editing, typing, and repeat. But largely this is the process it went through. Every draft chapter at each stage was also made available to supervisors for feedback, and towards the end, the document as a whole was made available to engineers in other disciplines for broader feedback, mainly on formatting.

A full week was allowed for when having the thesis printed and soft-bound. This is worth taking some time over, having a professional looking and feeling document demonstrates the same care that has been taken in writing the content, and the research work that led to this singular entity that encapsulates it all. This is all that the examiner will see of all that hard work.

The above summarises the approach that I took to completing the thesis. This is by no means the only, or even necessarily a good, approach. However, it got me to the end point having something worthwhile to submit for examination that I believe reasonably reflects the work that has gone into the research over the last four years.