This article was first published in October 2005. I have copied it over from the wayback archive as at some point this winter I’ll make another batch.

I stumbled on one final bottle from this batch in the garage (February 2016 – see photo) and figured it was worth a taste as the cork had lasted well (I’d kept it laid on its side). It’s a potent wine, with a nose similar to mead, slight acidity but with a good depth and warmth to it. Best served from a sherry or port glass in small measures!

Over the next few weeks I’ll be running through the process of winemaking keeping you up to date with the latest developments. 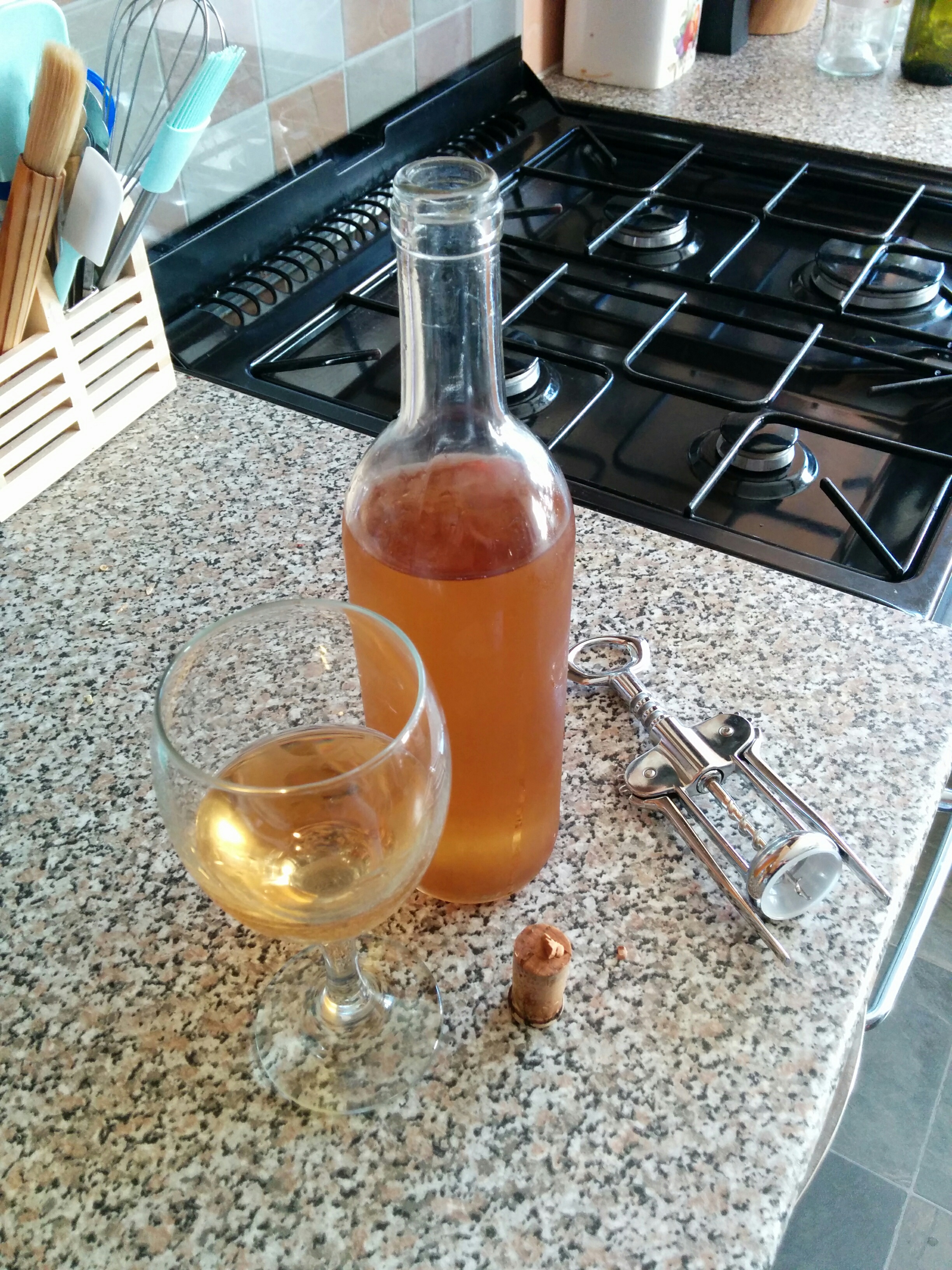 It’s very important to make sure you have everything you need at the beginning. There are starter kits available that come with all the basics that you can produce a simple wine through to completion. Generally these include:

Using the sterilising powder and following the instructions on the packet carefully (it’s powdered bleach of sorts) mix with warm water and allow all the equipment to soak for 10mins or so before rinsing thoroughly with cold water.

For each batch, take 1/2 tin of concentrate, 1 litre orange juice and mix in a large saucepan. Whilst warming gently and stirring add the 1Kg of sugar and dissolve as much as possible. When warmed through pour this using the funnel into a clean and empty demijohn. Add some cold water to the suacepan and dissolve the remaining sugar whilst warming gently. Then top the demijohn up with cold tapwater to the base of the shoulder.

Add the Pectolase and Yeast

Take 2 teaspoons of pectolase and add to the demijohn, swirl to mix in well.

Do the same with the yeast compound being sure to swirl and mix it in well with the solution.

Each airlock should be half filled with water (ideally with a little of the sterilising solution) and fitted into a bung with drilled hole. Then bung this in the top of the demijohn. These airlocks are very important as the desired reaction is an anaerobic process meaning no oxygen. If too much oxygen gets to the alcohol (ethanol) it causes it to go off and is converted to ethanoic acid, or vinegar. Which isn’t very tasty ;)

Now pop your demijohns in a suitable location. The ideal temperature is about 25 degrees Celcius, though so long as the temperature remains within 15 and 30 degrees it should be fine.

You should notice the airlocks bubbling away within a day depending on how warm the environment is. This is the yeast taking the sugar and creating alcohol and carbon dioxide.

When starting out the demijohns were filled to just below the shoulder. This is due to the large froth caused in th early stages of fermentaion. You don’t want all that sticky mess oozing out of the airlock. After about 5 days the fermentation is going strong, but there is no longer any froth so we can top up the liquid to just below the base of the neck with cold water.

The wine has cleared with no sign of the pectin, the yeast have dropped out in a 1inch deep lees on the bottom of the demijohn. Bubbling has eased right off to one every 1-2mins which is as good as done for this approach. So we now commence the termination…

Add a single crushed Campden Tablet to each demijohn and swirl thoroughly. Replace the fermentation lock and place somewhere that is 18 degrees centigrade or lower. Wait 20 minutes and swirl again.

The next day Stabilisng Powder was added to the wine, this will actually stop all fermentation and prevent any secondary fermentation. Add 1-2 teaspoons of Stabilising Powder to a clean demijohn and rack the wine off the lees into this demijohn. Swirl thoroughly, reattach the fermentation airlock and place back in a cool place.

We will now leave it 24 hours and then go about adding the finings. This process requires that the temperature of the wine is 18 degrees C or less.

A few days later we go about the fining process. This is to remove the fine suspension and preserve the wine. As this contains E numbers and emulsifiers etc it would be ideal to let nature do this part of the job for us and be patient. However, I’m getting thirsty so without rushing things I’d rather have it sooner than later.

Half a satchet of finings was used for each demijohn, taking half a cup of wine from the demijohn and whisking in the powder. The suspension was then returned to the demijohn and swirled. The airlock was replaced and demijohn placed back in the cool place. With a bit of luck it should have cleared within 7-10 days ready for filtering and bottling.

Two batches prepared and fermentation started. Now we will wait until day 5 when we will top up with cold water to just below the neck.

Each demijohn is swirled daily during the fermentation period to allow the sugars, yeast and enzymes to mix thoroughly and maintain active fermentation.

Both bottles were topped up to just below the base of the neck with cold water and swirled. Airlocks were replaced and demijohns put back in their place.

The bubbling has eased right off to once every two minutes or so. The wine itself has also cleared very nicely with the dead yeast sat on the bottom and no signs of the dastardly pectin to cloud the wine.

Have added 1 crushed Campden Tablet to each demijohn to terminate the fermentation and protect the wine from oxidation. The demijohns have now been placed in a cool place (18degrees C or less) and after 20mins will be swirled again.

One and a half teaspoons of Stabilising Powder were added to a clean(sterilised) demijohn and the wine racked off the lees into this, then swirled thoroughly. This was done for each demijohn. The airlocks were reattached and placed back in the cool place.

30pm - 16th November 2005 Half a satchet of finings was used for each demijohn, taking half a cup of wine from the demijohn and whisking in the powder. The suspension was then returned to the demijohn and swirled. The airlock was replaced and demijohn placed back in the cool place.

Wilkinsons usually have a range of the essentials for homebrew in store. www.wilko.com

Homebrew 4u – UK Based Supplier of Homebrew Wine, Beer, Cider and Cocktail Kits, Equipment, and other Resources. www.homebrew4u.co.uk

There are a number of resources I have found during wine brewing that are very rich in information.

Jack Keller’s rich and informative The Winemaking Homepage for the Beginner, Novice, and Seasoned Hobbyist.

The Wine Making Pages covering areas outside of Jack Keller’s site including Sake.